"And while we returned to cash-only transactions in a pay-by-app world, the most important currency we exchanged was kindness, with hospitality being the culture of the Camino."

During the month of June, the Pilgrim’s Office in Santiago de Compostela welcomed a total of 41,620 pilgrims from all corners of the world. All were on a journey to the legendary burial site of St. James the Greater, as peregrinos (pilgrims) have done since the discovery of the apostle’s remains in the ninth century. If so inclined, they might’ve performed the Camino de Santiago’s key rites of closure upon reaching Santiago, such as attending the Pilgrim’s Mass and visiting St. James’ relics in the crypts of the city’s impressive thirteenth-century cathedral. And finally, to mark—literally—the journey’s end, pilgrims received their Compostela. Issued in Latin, the certificate serves as a testament to the pilgrim’s fulfillment of the requirements in purpose and distance set forth by the Camino’s modern infrastructure to officially complete the medieval pilgrimage.

Each passing day brought us, each at our own pace, to well-preserved medieval monuments and landscapes, as well as informal shrines and sites that have become part and parcel of the modern Camino experience. As peregrinos along the Way, we embraced Camino rituals and rites and learned the expected courtesies in the albergues, like leaving your shoes outside, please. We adapted to the simple rules about when and what to eat, often opting for a Pilgrim’s Menu (or lots of pulpo, if you are Dr. Gyug), and wisely planning around siesta to avoid being “hangry” in a place as beautiful as Molinaseca—a lesson Louisa and I learned one afternoon. And while we returned to cash-only transactions in a pay-by-app world, the most important currency we exchanged was kindness, with hospitality being the culture of the Camino.

For instance, one morning when I was walking alone and I was forced to stop on the side of the path because of shin splints, a man noticed I was in pain. He stopped and knowingly smiled, gave me gel to soothe the pain, and left; I never even knew his name, nor could I identify what language he spoke. I would discover that the experience of kindness from a fellow pilgrim or hospitaleros, was hardly unique. In undertaking the journey together, pre-existing bonds with friends and mentors were strengthened while new ones were forged between laughter, songs, and tears. And as a consequence, our shared experience in fulfilling our roles as peregrinos created a sense of communitas.

The communitas I refer to thus far is one born from participating in the rite of passage, the liminal space between point A and point B, in a distinct break from normal life, as Dr. Gyug would say. Whether our reasons for walking were religious, spiritual, cultural, intellectual, or a vague combination of motives, whether we were seeking some form of growth or an opportunity to contemplate, and whether any of our expectations were met, we walked nonetheless. Together we embraced the practical and everyday grind that was the Camino: we woke just after dawn, walked to the next albergue, ate, listened to site reports, slept. And repeat. The quotidian is easily the most memorable part of the Camino and nothing to underestimate. It certainly created friendships that have endured into two reunions and many summer walks since the course ended.

Yet my own personal experience walking the Way was defined by another layer of communitas, namely that with the ghosts of the Camino’s illustrious history. I participated in the course for many reasons. One of the most important was to mark the transition to life after graduation as the last official Fordham event—it had a kind of finality for me that graduation did not. The Camino was an intellectual capstone in my study of history throughout Fordham. Not only was I walking with a formative mentor for my major and thesis, Dr. Myers, but I was also partaking in a study of history that was more tangible. What better way to learn it than by walking it? It only confirmed the kind of immersion with the discipline of history I wish to pursue in graduate school and as a (wannabe) historian—beyond an on-screen reproduction. As if I needed any more confirmation, I found in the Templars’ Library in Ponferrada a manuscript of Italian herbal literature that was the subject of a paper I wrote for the Mannion Society two years ago, open to the very entry on eggplants I studied for one of the earliest references to the tomato.

The more transcendent and affecting moments for me during the Camino were when I engaged in the vestiges of the past. I looked for evidence of devotional use in artifacts on display, something indicative of the belief that intercession to the divine could be facilitated through physical contact with relics. I thought of my own academic interest in Italian literature like Dante to perhaps gauge the penitential motivation of a medieval pilgrim and interrogate the rich literary tradition of pilgrimage. And in doing so, I learned that the Way is more than simply dirt, rocks, and crumbling foundations. It is not just another hiking trail or a way to travel in Europe on a budget. There is a reason, besides the obvious fact that this was indeed a course, that we spent months reading the Codex Calixtinus, learned to identify art historical styles and the major periods of Spanish history, and traced the development of Camino’s infrastructure from past to present before our two weeks in Spain.

Without consideration of the historical context of the Camino to balance the daily practical routine, we forfeit the opportunity to realize that we become part of the living history of the common journey that is the Camino, ever-changing and constantly shaped by those who walk it over time.

I felt this most strongly on the walk to Molinaseca, my favorite day for many reasons. The walk is one of the most scenic routes along the Camino as you ascend Monte Irago, which used to mark the traditional boundary between the Maragatería and Bierzo regions. The rain was relentless that morning, but the white broom and wild lavender coating the hillsides were no less beautiful. So too were the mountains in the surrounding valley covered in mist (cue Lord of the Rings music). 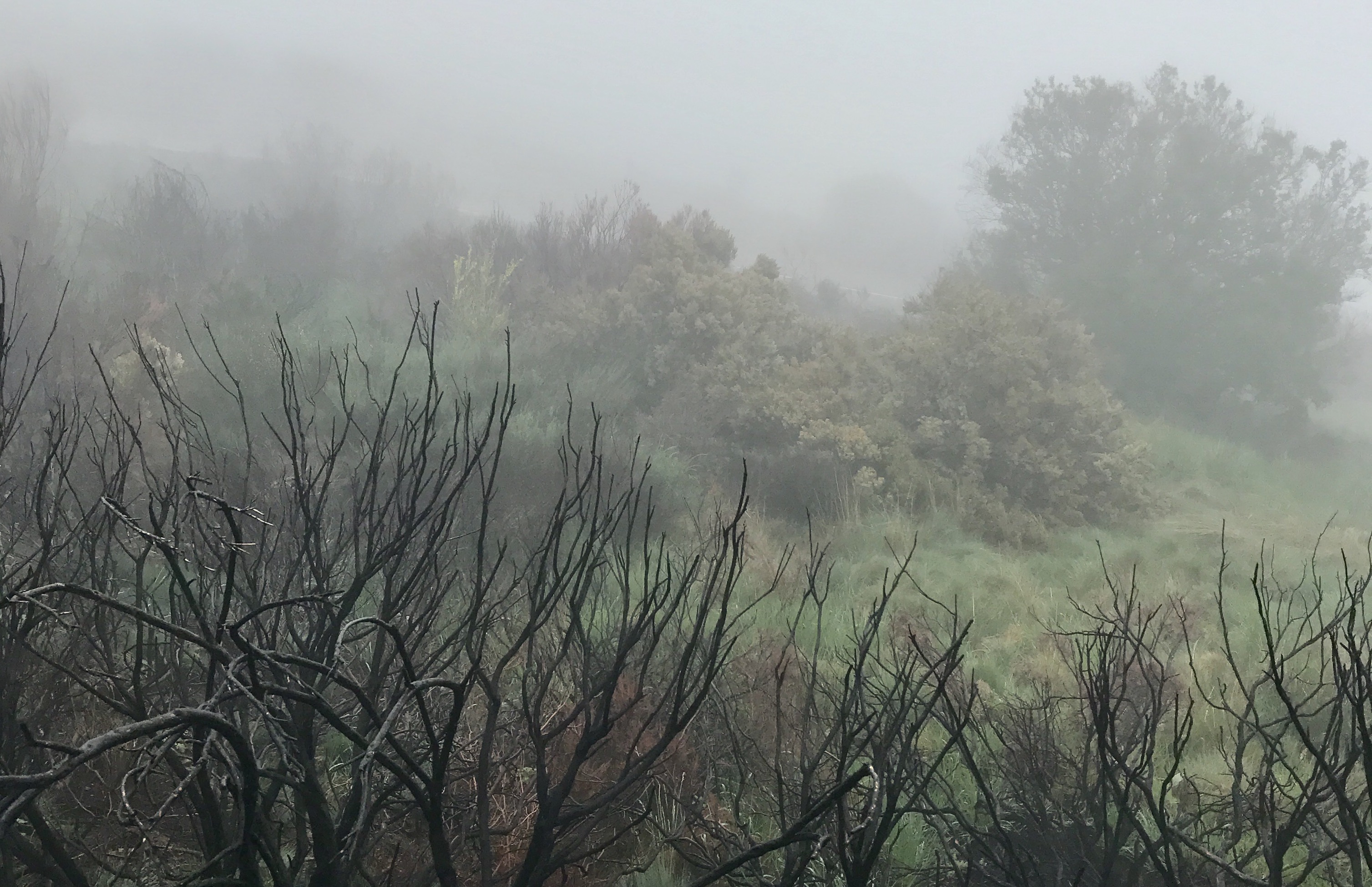 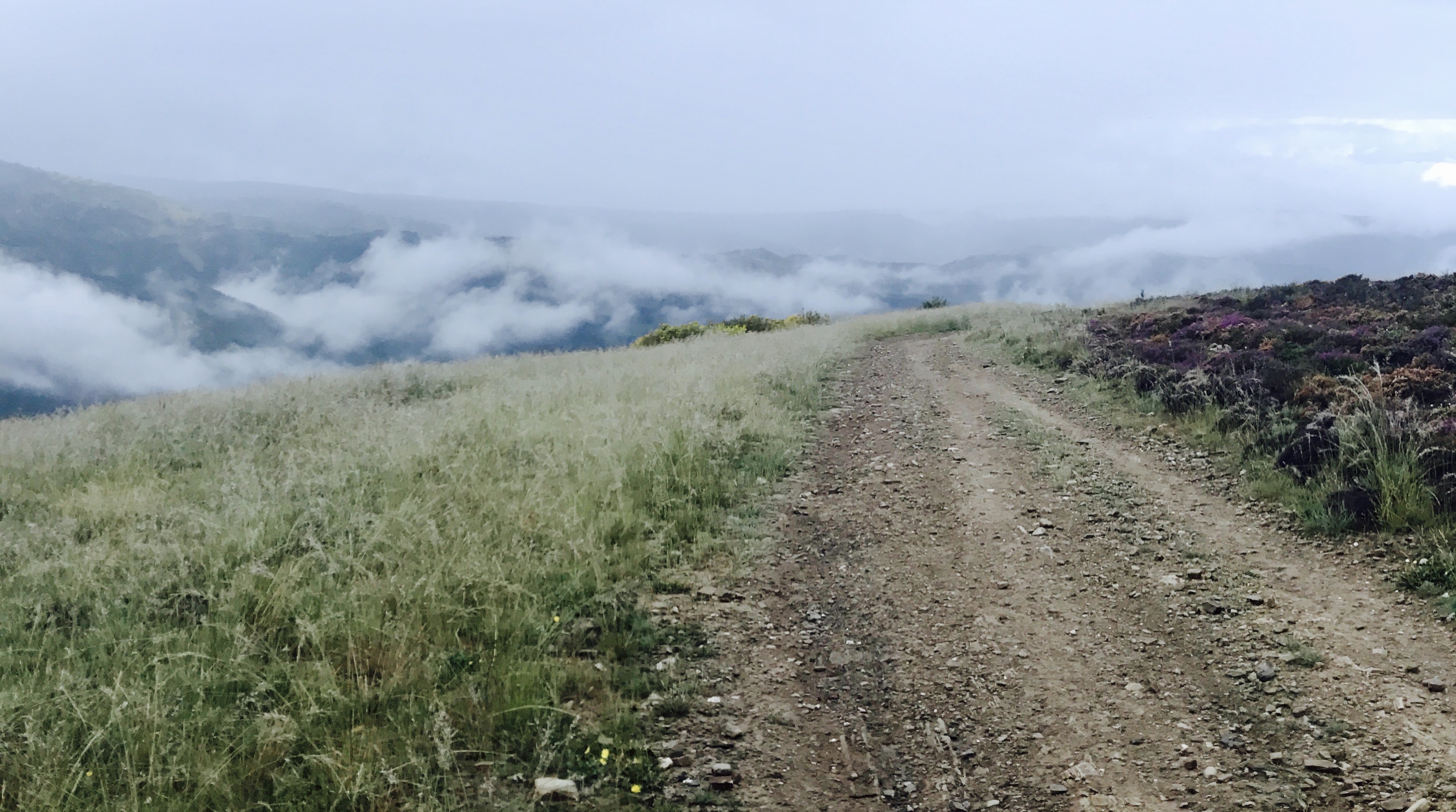 At the summit of Monte Irago, the highest point in elevation along the Camino (roughly 1500 m), there is a famous milladoiro, a pile of rocks that marks the distinct crossroads, topped by a small iron cross. This is La Cruz de Ferro, which has become an informal shrine since the mid-1990s. The cross as it exists now, adorned with ex-votos, flowers, shells, letters, and stones with dates, names, and messages, is a modern phenomenon with varying traditions. Even the neighboring chapel dedicated to St. James, ancient in appearance, was built in 1982. 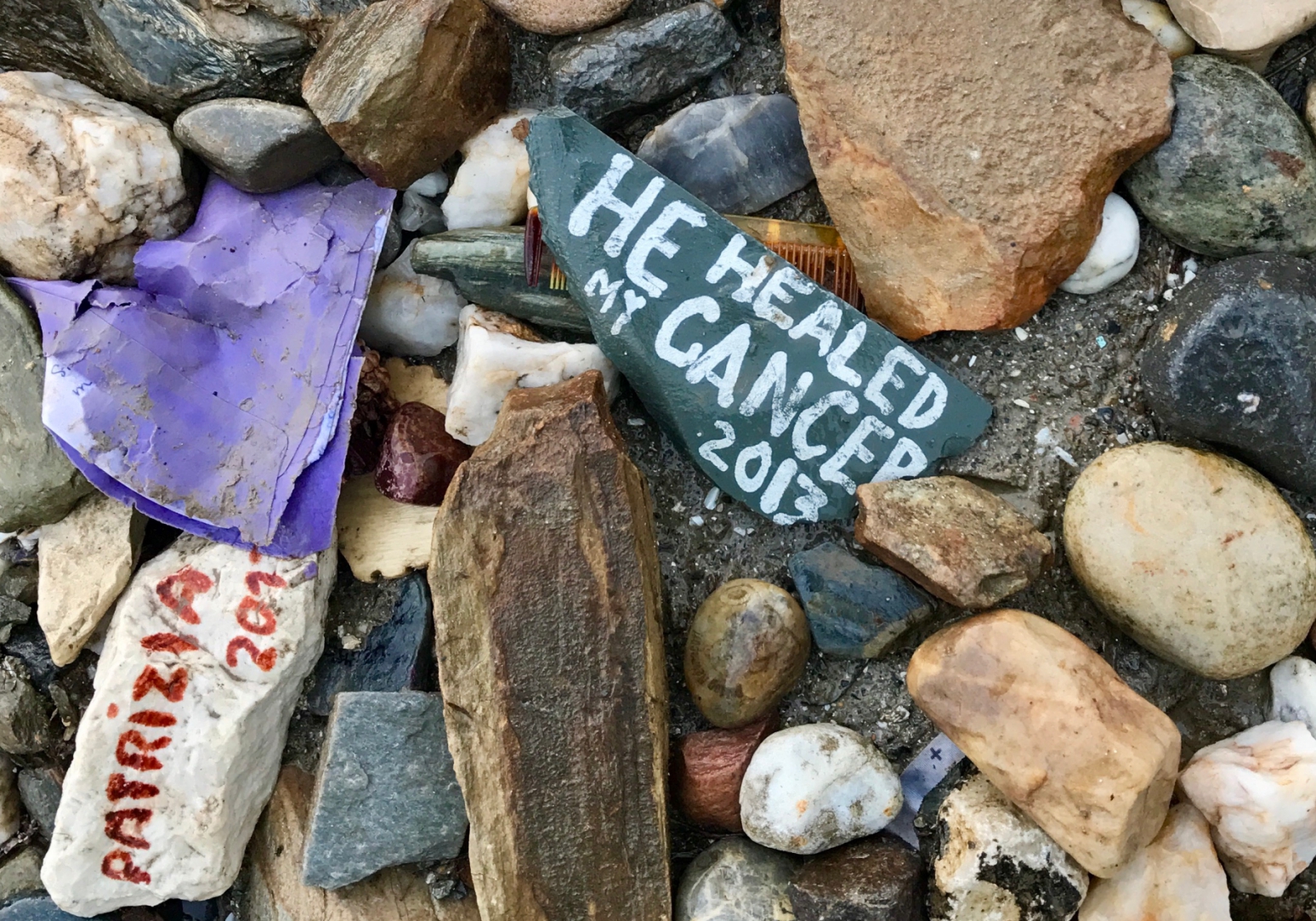 The current unwritten rule dictates that a pilgrim must carry a stone from home and leave it at the base of the cross; its weight symbolizes that of one’s sins or burdens. Yet it is unknown if the cross held this significance during the height of the Camino’s popularity. Supposedly the hermit Gaucelmo, who established the nearby Hospital de San Juan in 1103, now in ruins, placed the original cross and travelers simply left a stone to mark the pass for greater visibility. And before him, Romans may have marked the area, as they marked most high passes, with a monument of stones dedicated to Mercury, the patron god of travelers. And before the Romans, Celts marked mountain summits with stones of their own, i.e. cairns. In other words, the traveler’s ritual of marking the summit with a stone has remained the same, but evolved in significance over time, adapting to the various human traditions and groups that have arrived at the exact spot on the very same road for centuries. The site is symbolic of the Camino itself. To make the pilgrimage today is hardly an exact replica of the medieval pilgrim’s journey; there are inevitable modern additions, amendments, or vast differences. But knowing and appreciating its history on its own terms allows for the recognition of striking continuities that would go unnoticed otherwise.

I conclude with the serendipitous reminder I received in Puebla de Sanabria, a small medieval town I travelled to during my period of post-Camino blues just before I returned home. The town is along the Via de la Plata (the Silver Way), the longest Camino route stretching from Andalucia in the South to Galicia. The commemorative plaque reminds the pilgrim of the Camino’s living history, beginning with the ebb and flow of ancient and medieval ethnic groups that shaped the Camino. It continues, of course, with the modern pilgrim’s personal journey on the Camino (and throughout life), the wave of one’s own history, which contributes to the larger communal one that persists throughout time: 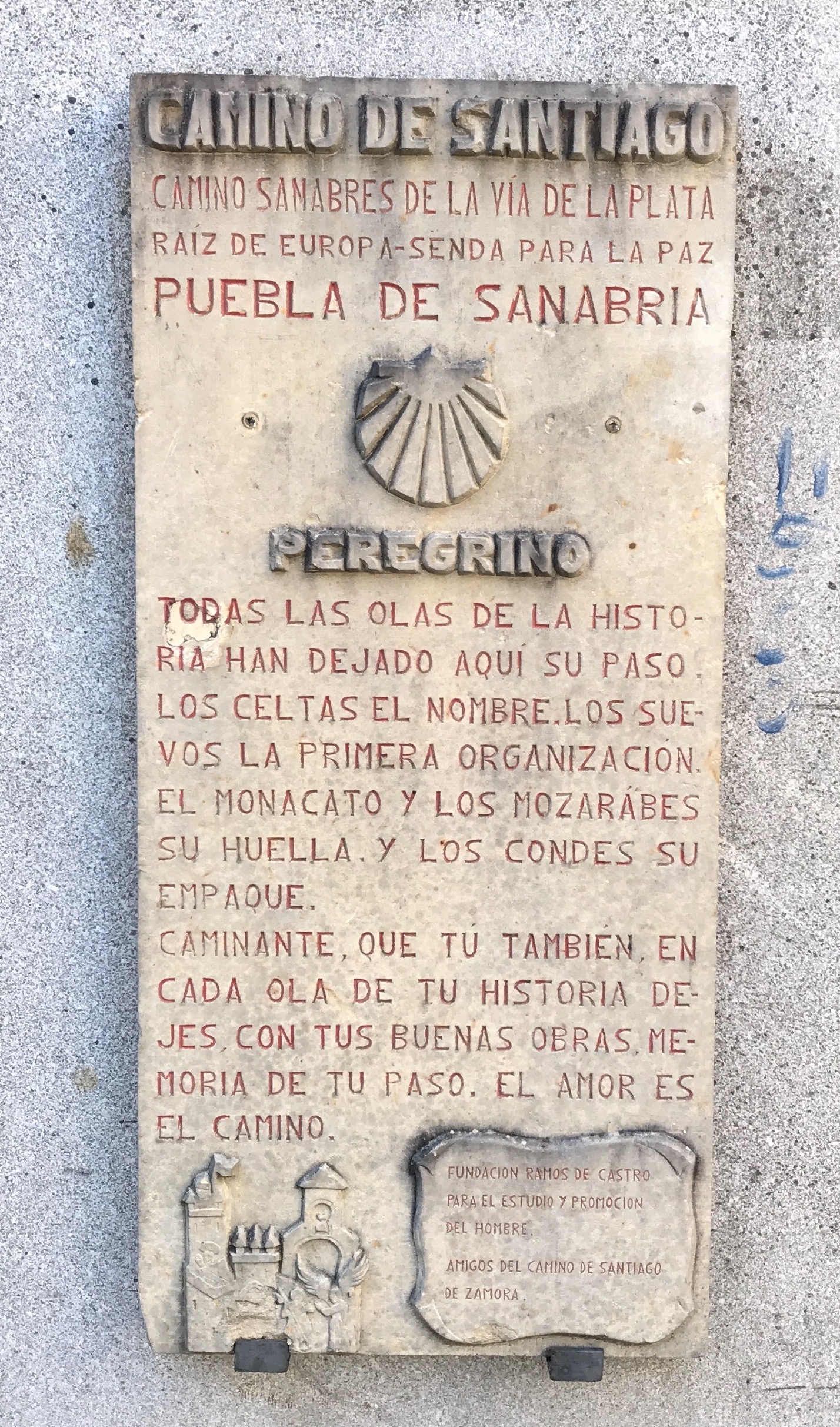